Chest dysphoria a bit too big. 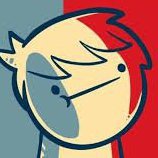